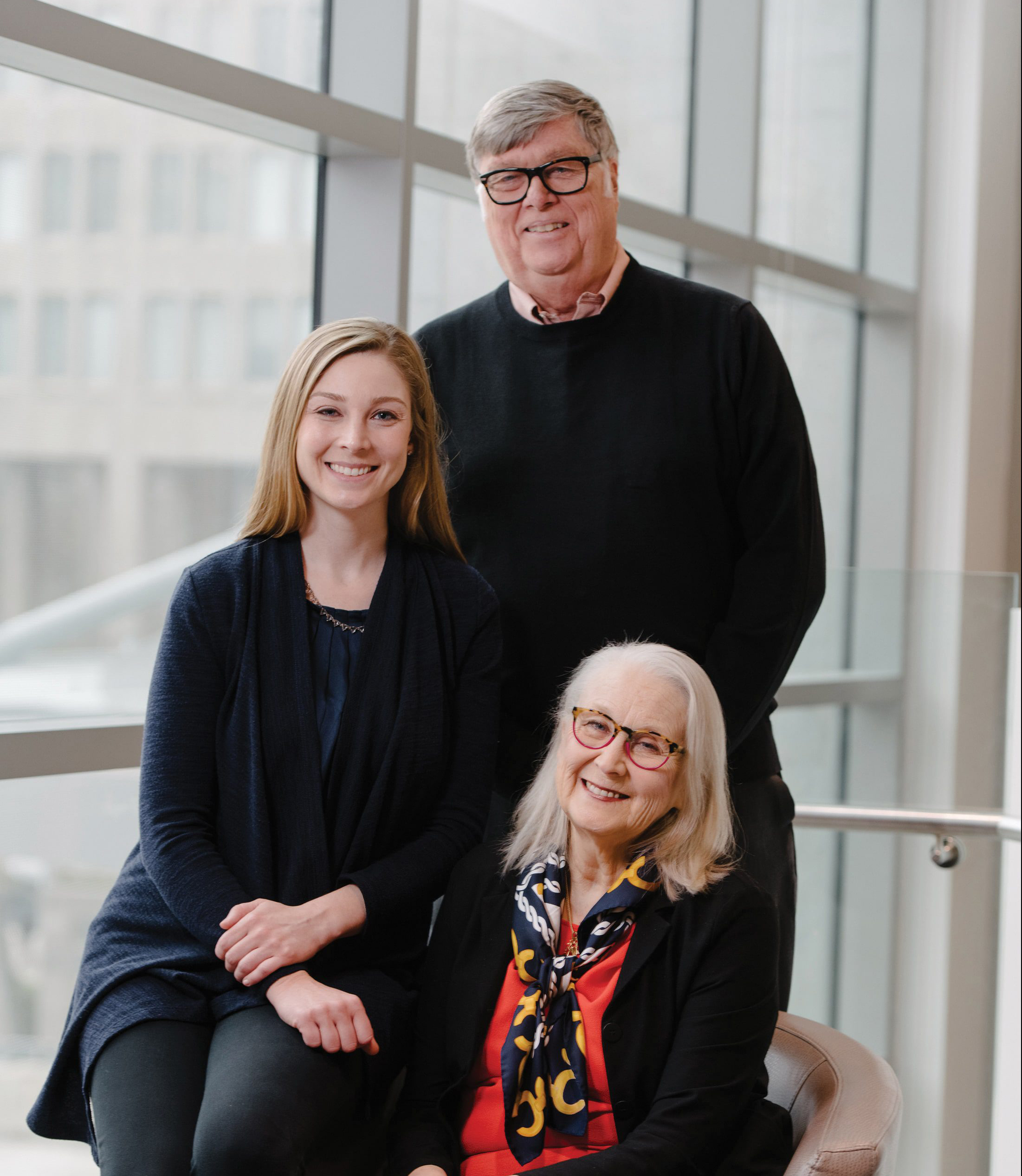 Grateful patient gives back to help research help others

In the early 2000s when Urve Earthy, now 74, started fainting without warning, she didn’t think it was all that serious. “Lots of people faint now and then,” she says. But over the next 15 years of her life, the spells grew more frequent—often happening three or four times a week. And they began to last longer and bring lingering dizziness and weakness.

When no one was around to catch her, Urve sometimes hit the ground hard, sustaining everything from a nasty bump on the head to major bruising and broken ribs. Mostly, though, she grew to recognize the signs of becoming unsteady. “Oh, I know your wife,” an employee at a shop Urve frequented once told her husband, David. “She’s the one who sits down on the floor now and then.”

The Earthys did their best to figure out what was going on. Urve’s family doctor referred her to a cardiologist who said her heart was sound. He in turn sent her to other specialists, who performed a raft of tests before sending her to more specialists. “We probably saw 12 to 15 different doctors over the years,” says David. “And each time we’d have to wait months in between.” None of them could come up with a definitive or even a tentative diagnosis.

It wasn’t until last December that the Earthys got some answers. Their daughter Alex’s research led them to the door of Dr. Paula Harvey, a cardiologist at Women’s College Hospital (WCH) and medical director of the Women’s Cardiovascular Health Initiative at WCH. After reviewing the evidence, Dr. Harvey provided a diagnosis of dysautonomia, orthostatic hypotension—a dysfunction of the autonomic nervous system.

She accepted Urve as a patient and began overseeing her care. With Dr. Harvey’s help, Urve embarked on a treatment and medication regimen that has helped stabilize her condition. “It was such a relief,” admits David. “We were so reassured and so grateful.”

Ultimately, though, the Earthys wanted to ensure others wouldn’t face the same long wait for diagnosis and hit-and-miss treatment they had received over the years. So, together with their children, they made a significant donation to Women’s College Hospital to fund two fellowships in dysautonomia and heart health, to benefit others who may be experiencing the same challenges in accessing care.

The goals: to test and develop clinical techniques for diagnosis and treatment of dysautonomia; develop communications programs to spread awareness, research and care options among doctors and medical specialists; and create a network of medical professionals to treat and care for Canadian patients. There are also funds to support virtual care innovations at Women’s College Hospital, which aim to help more people access high quality care from the comfort of home.

As Dr. Harvey points out, Urve’s battle to get a diagnosis is by no means unique for sufferers of dysautonomia. Women make up approximately 85 per cent of those with the most common form of the disease, POTS (postural orthostatic tachycardia syndrome). Dysautonomia patients present with a range of symptoms that includes fainting and lightheadedness, but also chest and gastrointestinal discomfort, brain fog, fatigue and dry eyes and mouth. “The collection of symptoms doesn’t fall into a recognizable package,” says Dr. Harvey. “And patients bounce from doctor to doctor because nobody has the tools or the knowledge to put it all together.”

To complicate matters, dysautonomia comes in different subtypes. “It’s not as rare as you might think,” says Dr. Harvey, who is one of only about 15 doctors across Canada that include dysautonomia as an area of specialization. But a lack of training and understanding of the condition among medical professionals means the unique and perplexing symptoms often go unrecognized. “I had somebody a few weeks ago who had seen 30 different doctors,” she says. “The inability to diagnose these patients puts enormous strain on the entire healthcare system as well as the affected individuals.”

Currently there is no cure for dysautonomia, points out Dr. Harvey, and treatment options are frequently not entirely effective. Further research is desperately needed to learn about how best to reduce disability, improve care and treatment options and provide patients with positive health outcomes and improved quality of life in the face of a profoundly debilitating disorder.

In Urve’s case, even with medication, growing fatigue forces her into bed before 9 p.m. most nights, where she remains until noon the next day. Some days, she simply lacks the stamina to get out of bed and she requires full-time help from David or other family members. “Without medication, it’s almost impossible for her to leave the house,” says Dr. Harvey.

Although Urve is matter-of-fact about the limitations she faces, she hopes her family’s gift will allow for better treatment options for those suffering from dysautonomia, including perhaps emerging virtual monitoring techniques, and ensure more healthcare professionals recognize symptoms when they see them. Women with dysautonomia are often accused of malingering, points out Dr. Harvey. In fact, before her diagnosis, Urve was chastised by a nurse for “lying about in bed” after an episode, even though standing made her immediately faint.

The focus on dysautonomia is reflective of WCH’s long legacy of advocating for the health of women, says Dr. Harvey.  “We have the first-ever women’s-only cardiac rehab program, which launched in 1996, right at the head of the curve of people beginning to understand that women and men are not the same,” she says. “And we’re still working to raise awareness of different heart problems that affect women across their lifespan.”

As for David and Urve Earthy, they regard their family’s transformational gift as a rare opportunity. Their children were involved in the decision and they are proud to be able to support WCH as a family.  “We feel very good about being able to give our lives meaning through this gift,” says David. “None of us live in a vacuum. We’ve been helped by other people. It’s good to give back.”

Expert sexual-health care in a safe and non-judgmental environment